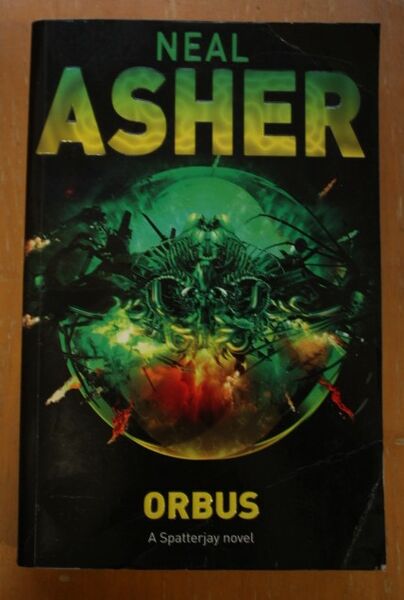 This is a follow-up to The Voyage of the Sable Keech tracing the journey of an Old Captain, Orbus - a sadist in charge of a crew of masochists - to a planetary wasteland called The Graveyard, lying between the Polity and the Prador Kingdom. An ancient war drone by the name of Sniper has stowed away aboard his spaceship, and the purpose of the journey is not entirely what the captain expected. Also heading in the same direction is the Prador king and the Prador Vrell. Vrell, having been mutated by the Spatterjay virus into something powerful and dangerous, has seized control of a Prador dreadnought, killing much of its crew, and is intent on heading back to the Prador Third Kingdom to exact vengeance on the King of the Prador, who tried to have him killed. All three ships are heading towards a climactic confrontation to The Graveyard, where underlying truths about the virus are revealed and an ancient menace to civilisation reappears...

In the far future, the Heliothane Dominion is triumphant in the solar system, after a bitter war with their Umbrathane progenitors. But some of the enemy have escaped into the past, intent on wreaking havoc across time. The worst of these is Cowl, an artificially forced advance in human evolution but one who is no longer human. Polly, desperate to obtain funds to support her habits, is unprepared for her involvement with Nandru Jurgens, a Taskforce soldier, and the killers pursuing him. Nor can she resist the alien 'tor' which she feels impelled to attach to her arm. But she must learn fast, as she is dragged back through time, not least that to the denizens of some earlier eras, she is little more than a convenience food. Initially, the fragment of tor imbedded in Tack’s wrist sums up his value to the Heliothane – a point brought home to him with bloody abruptness. But, as a vat-grown programmable killer employed by U-gov, he is no stranger to violence. His long journey into the lethal world of the Heliothane is only beginning, the extent of his mission just becoming apparent. Meanwhile, hunting throughout time and the alternates, Cowl’s pet, the tor beast, grows vast and dangerous. And the beast continues to feed.

The Argus Space Station looks down on a nightmarish Earth. And from this safe distance, the Committee enforces its despotic rule. There are too many people and too few resources, and they need twelve billion to die before Earth can be stabilized. So corruption is rife, people starve, and the poor are policed by mechanized overseers and identity-reader guns. Citizens already fear the brutal Inspectorate with its pain inducers. But to reach its goals, the Committee will unleash satellite laser weaponry, taking carnage to a new level.

This is the world Alan Saul wakes to, travelling in a crate destined for the Calais incinerator. How he got there he doesn’t know, but he remembers pain and his tormentor’s face. He also has company: Janus, a rogue intelligence inhabiting forbidden hardware in his skull. As Janus shows Saul an Earth stripped of hope, he resolves to annihilate the Committee and their regime. Once he’s discovered who he was, and killed his interrogator . . .

Earth’s Zero Asset citizens no longer face extermination. Thanks to Alan Saul, the Committee’s despotic network is in ruins and its robotic enforcers lie dormant. But the ruthless Serene Galahad sees an opportunity to grab power. On Mars, Var Delex fights for Antares Base’s survival, while the Argus Space Station hurtles towards the red planet. And Var knows whomever, or whatever, trashed Earth is still aboard. She must not only save the base, but deal with the first signs of rebellion. And aboard Argus Station, Alan Saul’s mind has expanded into the local computer network. In the process, he uncovers the ghastly experiments of the Humanoid Unit Development, the possibility of eternal life, and a madman who may hold the keys to interstellar flight. But Earth’s agents are closer than Saul thinks, and the killing will soon begin.