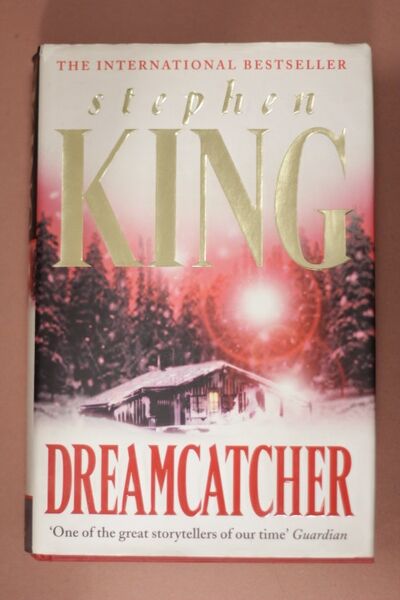 A modern classic, Carrie introduced a distinctive new voice in American fiction -- Stephen King. The story of misunderstood high school girl Carrie White, her extraordinary telekinetic powers, and her violent rampage of revenge, remains one of the most barrier-breaking and shocking novels of all time.

Make a date with terror and live the nightmare that is...Carrie

There's a place alone Interstate 50 that some call the loneliest place on Earth. It's not a very nice place to live. It's an even worse place to die. It's known as Desperation, Nevada...

Once upon a time, in the haunted city of Derry (site of Stephen King's IT and INSOMNIA), four young boys stood together and did a brave thing; something that changed them in ways they hardly understand.A quarter-century later, the boys are men who have gone their separate ways although they still get together once a year, to go hunting in the north woods of Maine. But this time a man comes stumbling into their camp, lost, disoriented and muttering about lights in the sky. Before long, these old friends will be plunged into the most remarkable events of their lives and a terrible struggle with a creature from another world. Their only chance of survival is locked in their past and in the boy they once rescued as a child.

When Edgar Freemantle moves to the remote island of Duma Key to escape his past, he doesn't expect to find much there.But Duma has been waiting for him, and something in the view from his window urges him to discover a talent he never knew he had.Edgar Freemantle begins to paint. And as he paints, the island's secrets begin to stir. Secrets of children lost in the undertow, of a ghost ship riding the distant horizon - and a family's buried past reaching long hands into the present.

International bestselling author Stephen King is in terrifying top form with his first collection of short stories in almost a decade. In this spine-chilling compilation, King takes readers down a road less traveled (for good reason) in the blockbuster e-Book "Riding the Bullet," bad table service turns bloody when you stop in for "Lunch at the Gotham Cafe," and terror becomes deja vu all over again when you get "That Feeling, You Can Only Say What IT IS in French"--along with eleven more stories that will keep you awake until daybreak. Enter a nightmarish mindscape of unrelenting horror and shocking revelations that could only come from the imagination of the greatest storyteller of our time.

The Department of Scientific Intelligence (aka "The Shop") never anticipated that two participants in their research program would marry and have a child. Charlie McGee inherited pyrokinetic powers from her parents, who had been given a low-grade hallucinogen called "Lot Six" while at college. Now the government is trying to capture young Charlie and harness her powerful firestarting skills as a weapon.

Is it possible to fully know anyone? Even those we love the most? What tips someone over the edge to commit a crime?For a Nebraska farmer, the turning point comes when his wife threatens to sell off the family homestead.A cozy mystery writer plots a savage revenge after a brutal encounter with a stranger.Dave Streeter gets the chance to cure himself from illness - if he agrees to impose misery on an old rival.And Darcy Anderson discovers a box containing her husband's dark and terrifying secrets - he's not the man who keeps his nails short and collects coins. And now he's heading home ...Like DIFFERENT SEASONS and FOUR PAST MIDNIGHT, which generated such enduring hit films as The Shawshank Redemption and Stand by Me, FULL DARK, NO STARS proves Stephen King a master of the long story form.

A game. A husband and wife game. Gerald's Game.

But this time Jesse didn't want to play. Lying there, spreadeagled and handcuffed to the bedstead while he'd loomed and drooled over her, she'd felt angry and humiliated.

So she'd kicked out hard. Aimed to hit him where it hurt.

And now he was dead - a coronary - on the floor.

Leaving Jesse alone and helpless in a lakeside holiday cabin. Miles from anywhere. No-one to hear her screams.

Alone. Except for the voices in her head that had begun to chatter and argue and sneer.

The little town of Castle Rock, Maine has witnessed some strange events and unusual visitors over the years, but there is one story that has never been told... until now.

There are three ways up to Castle View from the town of Castle Rock: Route 117, Pleasant Road, and the Suicide Stairs. Every day in the summer of 1974 twelve-year-old Gwendy Peterson has taken the stairs, which are held by strong (if time-rusted) iron bolts and zig-zag up the cliffside.

At the top of the stairs, Gwendy catches her breath and listens to the shouts of the kids on the playground. From a bit farther away comes the chink of an aluminum bat hitting a baseball as the Senior League kids practice for the Labor Day charity game.

One day, a stranger calls to Gwendy: "Hey, girl. Come on over here for a bit. We ought to palaver, you and me."

On a bench in the shade sits a man in black jeans, a black coat like for a suit, and a white shirt unbuttoned at the top. On his head is a small neat black hat. The time will come when Gwendy has nightmares about that hat...

Journey back to Castle Rock again in this chilling new novella by Stephen King, bestselling author of The Bazaar of Bad Dreams, and Richard Chizmar, award-winning author of A Long December. This book will be a Cemetery Dance Publications exclusive with no other editions currently planned anywhere in the world!

Five interconnected, sequential narratives, set in the years from 1960 to 1999. Each story is deeply rooted in the sixties, and each is haunted by the Vietnam War.

Set in a small-town North Carolina amusement park in 1973, Joyland tells the story of the summer in which college student Devin Jones comes to work as a carny and confronts the legacy of a vicious murder, the fate of a dying child, and the ways both will change his life forever.

The road in front of Dr. Louis Creed's rural Maine home frequently claims the lives of neighborhood pets. Louis has recently moved from Chicago to Ludlow with his wife Rachel, their children and pet cat. Near their house, local children have created a cemetery for the dogs and cats killed by the steady stream of transports on the busy highway. Deeper in the woods lies another graveyard, an ancient Indian burial ground whose sinister properties Louis discovers when the family cat is killed.

In a future so real and near it might be now, something happens when women go to sleep; they become shrouded in a cocoon-like gauze.

If they are awakened, and the gauze wrapping their bodies is disturbed or violated, the women become feral and spectacularly violent; and while they sleep they go to another place.

The men of our world are abandoned, left to their increasingly primal devices. One woman, however, the mysterious Evie, is immune to the blessing or curse of the sleeping disease.

Is Evie a medical anomaly to be studied, or is she a demon who must be slain?

Stephen King goes to the movies

Stephen King revisits five of his favorite short stories that have been turned into films: "The Shawshank Redemption" (based on the novella "Rita Hayworth and the Shawshank Redemption") was nominated for seven Academy Awards, including Best Picture and best actor for Morgan Freeman. "1408" starred John Cusack and Samuel L. Jackson and was a huge box office success in 2007. The short story "Children of the Corn" was adapted into the popular "Children of the Corn." "The Mangler" was inspired by King's loathing for laundry machines from his own experience working in a laundromat. "Hearts in Atlantis" (based on "Low Men in Yellow Coats," the first part of the novel "Hearts in Atlantis") starred Anthony Hopkins.

This collection features new commentary and introductions to all of these stories in a treasure-trove of movie trivia.

The name on the covers was Bachman. But the imagination could only belong to one man. A compelling collection of four spellbinding stories of future shock and suspense - "Rage", "The Long Walk", "Roadwork" and "The Running Man" - in which Stephen King also explains 'Why I was Richard Bachman'.

Written by the author of "Carrie", "Salem's Lot", "The shining" and "Christine", this novel features Thad Beaumont, a Pulitzer Prize-winning author who has developed a lucrative thriller-writing alter ego named George Stark. He stops being fun so Beaumont wants to kill him.

Set in the 1930s at the Cold Mountain Penitentiary's death-row facility, The Green Mile is the riveting and tragic story of John Coffey, a giant, preternaturally gentle inmate condemned to death for the rape and murder of twin nine-year-old girls. It is a story narrated years later by Paul Edgecomb, the ward superintendent compelled to help every prisoner spend his last days peacefully and every man walk the green mile to execution with his humanity intact.

Edgecomb has sent seventy-eight inmates to their death with "old sparky," but he's never encountered one like Coffey -- a man who wants to die, yet has the power to heal. And in this place of ultimate retribution, Edgecomb discovers the terrible truth about Coffey's gift, a truth that challenges his most cherished beliefs -- and ours.

Originally published in 1996 in six self-contained monthly installments, The Green Mile is an astonishingly rich and complex novel that delivers over and over again.

When an eleven-year-old boy is found murdered in a town park, reliable eyewitnesses undeniably point to the town's popular Little League coach, Terry Maitland, as the culprit. DNA evidence and fingerprints confirm the crime was committed by this well-loved family man.

Horrified by the brutal killing, Detective Ralph Anderson, whose own son was once coached by Maitland, orders the suspect to be arrested in a public spectacle. But Maitland has an alibi. And further research confirms he was indeed out of town that day.

As Anderson and the District Attorney trace the clues, the investigation expands from Ohio to Texas. And as horrifying answers begin to emerge, so King's propulsive story of almost unbearable suspense kicks into high gear.

Terry Maitland seems like a nice guy but there is one rock-hard fact, as unassailable as gravity: a man cannot be in two places at the same time. Can he?

Everything is familiar. But everything has changed.Coming back to the little community is like walking into a nightmare for Jim Gardener, poet, drunk, potential suicide.It all looks the same, the house, the furniture, Jim's friend Bobbi, her beagle (though ageing), even the woods out at the back.But it was in the woods that Bobbi stumbled over the odd, part-buried object and felt a peculiar tingle as she brushed the soft earth away.Everything is familiar. But everything is about to change.