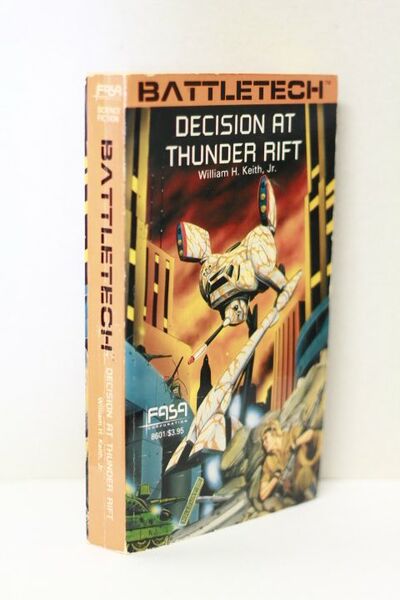 Thirty years before the Clan invasion, the crumbling empires of the Inner Sphere were locked in the horror of the Third Succession War. The great Houses, whose territories spanned the stars, used BattleMechs to smash each other into rubble.

Grayson Death Carlyle had been training to be a MechWarrior since he was ten years old, but his graduation came sooner than expected. With his friends and family dead and his father's regiment destroyed, young Grayson finds himself stranded on a world turned hostile. And now he must learn the hardest lesson of all: it takes more than a BattleMech to make a MechWarrior.

To claim the title of MechWarrior all he has to do is capture one of those giant killing machines by himself.

If it doesn't kill him first.

Truebirth – Born in the laboratory, these genetically engineered soldiers train to be the ultimate warriors. They are the elite pilots of the Clan's fearsome BattleMech war machines.

Freebirth – Born of the natural union of parents, these too are soldiers, but pale imitations of their truebirth superiors. Despised for their imperfections, they fight where and when their Clan commands.

Aidan has failed his Trial of Position, the ranking test all truebirth warriors of the Clan Jade Falcon must pass. He is cast out. Disgraced. His rightful Bloodname denied him.

Aidan will do anything to gain that name. Even masquerade as the thing he has been taught to despise.

A Clash of Empires:
In 2786, the elite Star League Army fled the Inner Sphere, abandoning the senseless bloodshed ordered by the Successor Lords. Now, almost three hundred years later the Clans, heirs of the Star League Army, turn their eyes back upon their former home. Nothing will stop them from raising the Star League banner over Earth once again.

A Clash of Armies:
For two years, the Clans' BattleMech war machines have overwhelmed the armies of the corrupt Successor Lords. Now, at the gates of Earth the Clans must fight one final battle, a battle that will decide the fate of humanity for all time.

A Clash of Cultures:
For Star Colonel Aidan Pryde of Clan Jade Falcon the battle is more than a question of military conquest. It is an affirmation of the superiority of the Clan way, a way of life he has sworn to uphold despite his fear that the noble crusade has fallen prey to the lust and ambition of its commanders.