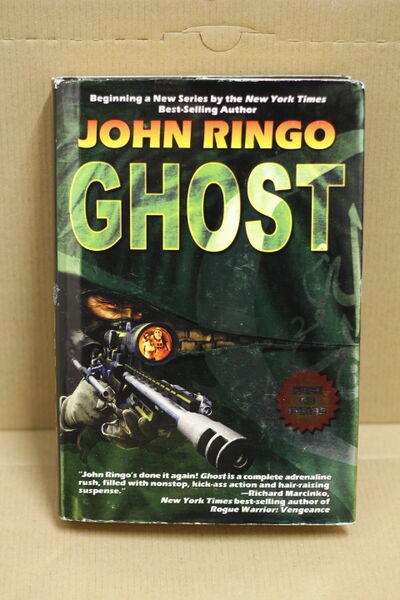 Former SEAL Michael Harmon, Team Name "Ghost", retired for service injuries, is not enjoying college life. But things are about to change, if not for the better. When he sees a kidnapping a series of, at the time logical, decisions leave him shot to ribbons and battling a battalion of Syrian commandos with only the help of three naked co-eds who answer to the names "Bambi," "Thumper" and "Cotton Tail." A fast-paced, highly-sexual, military-action thriller that ranges from a poison facory in the Mideast to the Florida Keys to Siberia, the novel will keep you guessing what twisted fate will bring next for the man once known as . . . Ghost. Keep an eye on him or . . . poof, he'll be gone.

There Will Be Dragons (Council Wars)

In the future there is no want, no war, no disease nor ill-timed death. The world is a paradise-and then, in a moment, it ends. The council that controls the Net falls out and goes to war. Everywhere people who have never known a moment of want or pain are left wondering how to survive. But scattered across the face of the earth are communities which have returned to the natural life of soil and small farm.

In the village of Raven's Mill, Edmund Talbot, master smith and unassuming historian, finds that all the problems of the world are falling in his lap. Refugees are flooding in, bandits are roaming the woods, and his former lover and his only daughter struggle through the Fallen landscape. Enemies, new and old, gather like jackals around a wounded lion. But what the jackals do not know is that while old he may be, this lion is far from death. And hidden in the past is a mystery that has waited until this time to be revealed. You cross Edmund Talbot at your peril, for a smith is not all he once was. . . .

When the Devil Dances (Posleen War 3)

After five years of battling the extraterrestrial Posleen invaders, the remnants of the human armies, under the command of Major Michael O'Neal, prepare to make a last-ditch effort to drive the aliens, under the direction of Tuslostenaloor, from Earth, a fateful battle that will define the course of the galaxy for generations.