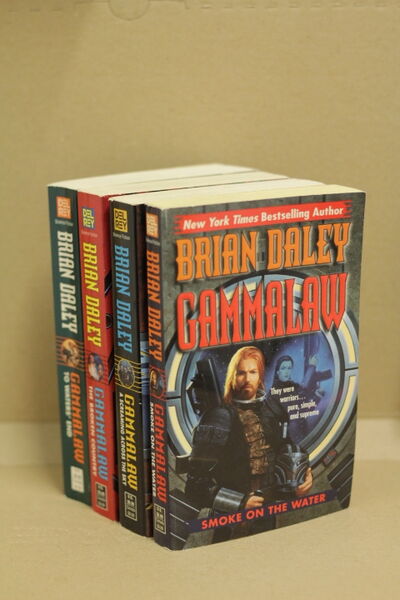 #1 Smoke on the Water

Though they contemplated a final suicide mission of blood, guts, and glory, the Exts knew their warrior superskills were no match for the LAW--Legal Annexation of Worlds--who were sent into space by the mighty Periapt potentates to colonize new populations against the evil, alien Roke.

Among the Ext draftees bound for Periapt were Allgrave Burning, his techno-wizard cousin Lod, and beautiful, death-scarred Ghost, all sworn to a greater purpose, destined to fight in a star-torn war like none other. For a mysterious, danger-shrouded planet beckoned them--along with a disgraced starship captain and a powerful high priestess--for the greatest battles of their lives

#2 A Screaming Across the Sky

Arrival on the ominous planet of Aquamarine was a splashdown into danger and death for Periapt high priestess Dextra Haven and her ragtag force of scientists and Ext warriors. Yet Dextra was undeterred, certain that Aquamarine held the key to peace between humans and a fierce alien race.

But the priestess and her mighty warriors would need to summon all their powers, for the sea-planet was rife with many deadly mysteries--and conquerors both seen and unseen lurked in cyberspace and outer space waiting to invade, possess, and destroy.

When the reception for Madame Dextra Haven erupted in a bloodbath, the offworlders quickly realized that Aquamarine's natives were not to be underestimated. But the Aquam were not the only dangers to the Periapt forces. A menace from within her own troops could drastically alter Haven's beneficial plans for Aquamarine--and the secret cyber-personality buried deep within the recesses of one man's mind could be the key to communicating with the terrifying sentient water-entity controlling the planet.

With declining resources and limited firepower, the GammaLAW mission faced utter failure, but Haven and her Exts weren't about to give up without a fight--even if it could be their last.

The battered GammaLAW mission to Aquamarine had barely succeeded in ending the war with the world-destroying aliens, the Roke. The key to victory lay deep within Aquamarine's terrifying sentient ocean, and Commissioner Dextra Haven was determined to reveal those secrets at all costs.

But she and the Exts were running out of time--the Aquamarine natives were dead-set on destroying the Oceanic, which controlled their lives with its awesome powers. And the Roke, hidden behind one of Aquamarine's moons, were preparing to strike. All talk aside, it was a do or die proposition.