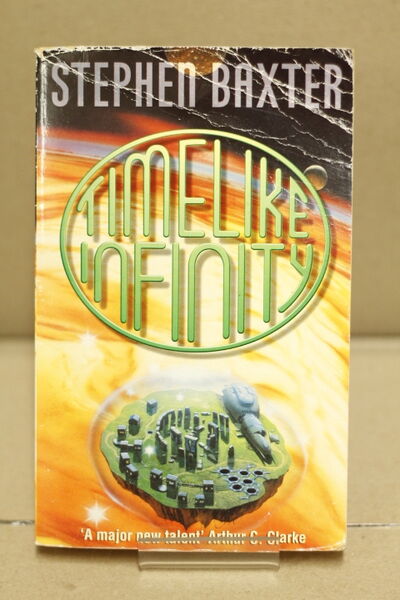 Timelike Infinity
The strange region at the end of time where the Xeelee, owners of the universe, are waiting... The second novel in Stephen Baxter's Xeelee sequence.

First there were good times: humankind reached glorious heights, even immortality. Then there were bad times: Earth was occupied by the faceless, brutal Qax. Immortality drugs were confiscated, the human spirit crushed. Earth became a vast factory for alient foodstuffs.

Into this new dark age appears the end of a tunnel through time. Made from exotic matter, it is humanity's greatest engineering project in the pre-Qax era, where the other end of the tunnel remains anchored near Jupiter. When a small group of humans in a makeshift craft outwit the Qax to escape to the past through the tunnel, it is not to warn the people of Earth against the Qax, who are sure to follow them. For these men and women from the future are themselves dangerous fanatics in pursuit of their own bizarre quantum grail.

Michael Poole, architect of the tunnel, must boldly confront the consequences of his genius.

Stephen Baxter's new series is full of page-turning action, intriguing mystery and awe-inspiring scientific speculation. Full of evocative historical detail and characters who jump of the page this is history lived by people whose future is not yet locked as our past. Navigator is the third of the series, and delves deep into the discovery of America.

Stephen Baxter's epic sequence of Xeelee novels was introduced to a new generation of readers with his highly successful quartet, Destiny's Children, published by Gollancz between 2003 and 2006. But the sequence of novels began with RAFT in 1991.

From there it built into perhaps the most ambitious fictitious universe ever created. Beginning with the rise and fall of sub-quantum civilisations in the first nano-seconds after the Big Bang and ending with the heat death of the universe billions of years from now the series charts the story of mankinds epic war against the ancient and unknowable alien race the Xeelee.

This is a landmark in SF.

Doctor Who: The Wheel of Ice

Hurtling through a vortex beyond time and space is a police box that’s not a police box. The TARDIS has carried the Doctor and his companions, Jamie and Zoe, to all sorts of places, but now, when they don’t want to go anywhere, the TARDIS makes a decision for them. Like it or not, they’re coming in for a landing, who knows where or when…

The Wheel. A ring of ice and metal turning around a moon of Saturn, home to a mining colony supplying a resource-hungry Earth. It’s a bad place to live—and a worse place to grow up.

The colony has been plagued by problems. Maybe it’s only a run of bad luck, but the equipment failures and thefts of resources have been increasing. And there are stories among the children of mysterious creatures glimpsed aboard the Wheel. Some of the younger workers are even refusing to go down into the warren-like mines any more.

And then one of them, surfing Saturn’s rings, saves an enigmatic blue box from destruction.

Once on the Wheel, the Doctor and his companions face a critical situation when they become suspected by some as the source of the ongoing sabotage.

They soon find themselves caught in a mystery that goes all the way back to the creation of the solar system. A mystery that could destroy the Wheel—and kill them all...

Four hostages are rescued from a group of religious extremists in Barcelona. After five years of being held captive together, they make a vow to always watch out for one another. But they never expected this. The world they have returned to has been transformed-by water. And the water is rising.

Many generations ago the Wall was first built to hold back the sea. Northland, a country of fertile plains and ancient forests rescued from the ocean, has become a thriving civilisation based on trade, technology and tradition, centred on the ancient home of the first builders, Etxelur. The whole of Europe, spanned by the Northlanders' steam caravan lines, has been changed in ways that could never have been predicted.

But nothing can last forever, not even the Wall. The weather is changing, growing colder, and in the wake of the long winters come famine, destruction and terror. And as whole nations are forced out of their lands and head for warmer climes, it seems that even Northland may not be able to endure.

But there is one man, an elderly scholar, who believes he can calculate why the world is cooling, and perhaps even salvage some scraps of the great civilisation of Etxelur. As he embarks on his grand quest across the world, as nations struggle for survival and the fires of war burn in the gloom, only one thing is certain.

The Ice is coming.

Stephen Baxter's epic series of a changed world reaches its chilling conclusion as the medieval world fights for survival in the cold of a winter without end.

The year is 2010. More than a century of ecological damage, industrial and technological expansion, and unchecked population growth has left the Earth on the brink of devastation. As the world’s governments turn inward, one man dares to envision a bolder, brighter future. That man, Reid Malenfant, has a very different solution to the problems plaguing the planet: the exploration and colonization of space. Now Malenfant gambles the very existence of time on a single desperate throw of the dice. Battling national sabotage and international outcry, as apocalyptic riots sweep the globe, he builds a spacecraft and launches it into deep space. The odds are a trillion to one against him. Or are they?

In the year 2015, astronaut Reid Malenfant is flying over the African continent, intent on examining a mysterious glowing construct in Earth's orbit. But when the very fabric of the sky tears open, spilling living creatures to the ground and pulling others inside (including his wife, Emma), Malenfant's quest to uncover the unknown becomes personal. While desperately searching to discover what happened to the woman he loves, Malenfant embarks upon an adventure to the very fount of human development . . . on earth and beyond.