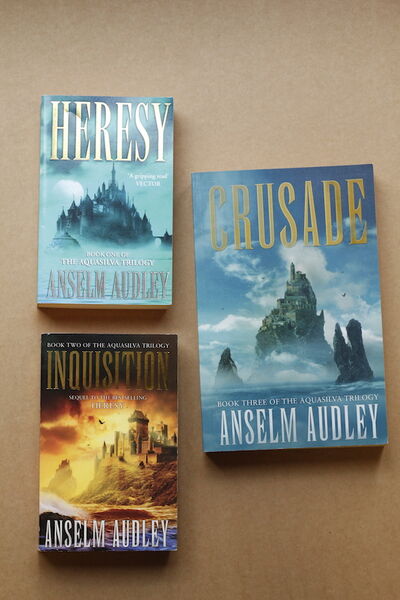 On the storm-wracked ocean world of Aquasilva, the priesthood of the Fire-God Ranthas holds supreme religious power.
Cathan, reluctant heir to the clan leadership of Lepidor, has never questioned the teachings of Ranthas’s priests and has little interest in politics, preferring to escape into the more orderly world of oceanography. But when a valuable iron deposit is discovered, Cathan must travel to a clan congress to inform his father – and in doing so discovers just how far the Domain is willing to go to secure absolute control, and how much they have distorted what he thought of as the truth.

Sent to a heretic citadel in the outer reaches of the rebellious Archipelago for training, Cathan learns a very different version of Aquasilva’s history, and makes contact with dissidents from across the world – but all of his skills and influence may not be enough when the Domain turns its eyes towards Lepidor . . .

Book Two of the Acclaimed AQUASILVA Trilogy! Only the fire-magic can hold back the encroaching darkness, but those who wield it, the fanatical priests of the Domain, would rule the entire world with an iron hand.

Cathan of Lepidor returns home after the battle that has restored his province to freedom and the rule of its count, Cathan's father. Now Cathan must set out once more, this time to discover the secret behind the storm-magic he used so successfully to save his clan.

Forces beyond his control begin to shape his future, threatening to overwhelm him. Unless he can regain control of his destiny, Cathan will find himself in the perilous position of leading the rebellious forces against the Inquisition of the Domain...

Cathan has discovered powers within himself since his story - and that of the waterworld, Aquasilva - began in HERESY. He has also found that he is the Emperor Orosius's brother - but Orosius is dead, and Eshar is now set in his place, thanks to the Imperial Navy's king-making. Meanwhile, the religious fanatics of the Domain continue to seek out heresy - and Cathan in particular. Still refusing to attempt to place himself on the Imperial throne, Cathan studies the history of storms and the terrible effects of previous meddling with Aquasilva's weather systems. But the Domain's dogs are everywhere, and capture lays in wait for him...and with it, the discovery of his true identity, and death. CRUSADE completes the AQUASILVA trilogy, which has seen the young Cathan come of age, in more ways than one. In its deep politics, world-building and characterisation, it is a masterpiece of fantasy fiction from a new star.