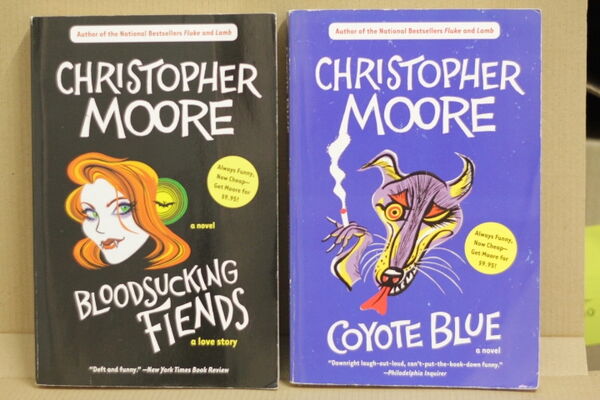 Jody never asked to become a vampire. But when she wakes up under an alley dumpster with a badly burned arm, an aching neck, superhuman strength, and a distinctly Nosferatuan thirst, she realizes the decision has been made for her.

Making the transition from the nine-to-five grind to an eternity of nocturnal prowlings is going to take some doing, however, and that's where C. Thomas Flood fits in. A would-be Kerouac from Incontinence, Indiana, Tommy (to his friends) is biding his time night-clerking and frozen-turkey bowling in a San Francisco Safeway. But all that changes when a beautiful undead redhead walks through the door ... and proceeds to rock Tommy's life -- and afterlife -- in ways he never imagined possible.

As a boy growing up in Montana, he was Samson Hunts Alone -- until a deadly misunderstanding with the law forced him to flee the Crow reservation at age fifteen. Today he is Samuel Hunter, a successful Santa Barbara insurance salesman with a Mercedes, a condo, and a hollow, invented life. Then one day, shortly after his thirty-fifth birthday, destiny offers him the dangerous gift of love -- in the exquisite form of Calliope Kincaid -- and a curse in the unheralded appearance of an ancient Indian god by the name of Coyote. Coyote, the trickster, has arrived to transform tranquillity into chaos, to reawaken the mystical storyteller within Sam ... and to seriously screw up his existence in the process.

Pocket has been Lear's cherished fool for years. So naturally Pocket is at his brainless, elderly liege's side when Lear demands that his kids swear to him their undying love and devotion. Of course Goneril and Regan are only too happy to brownnose Dad. But Cordelia believes that her father's request is kind of . . . well . . . stupid, and her blunt honesty ends up costing her her rightful share of the kingdom and earns her a banishment to boot.

Well now the bangers and mash have really hit the fan. And the only person who can possibly make things right . . . is Pocket. Now he's going to have do some very fancy maneuvering--cast some spells, start a war or two--the usual stuff--to get Cordelia back into Daddy Lear's good graces, to derail the fiendish power plays of Cordelia's twisted sisters, and to shag every lusciously shaggable wench who's amenable to shagging along the way.

Pocket may be a fool . . . but he's definitely not an idiot.

Christopher Moore's demonically seductive storylines and zany, addictive brand of humor have earned him comparisons to Carl Hiaasen, Christopher Buckley, Douglas Adams, and other comic virtuosos. He's given us lovelorn vampires, marooned love goddesses, and addled sea beasts. Now discover his ingenious debut novel, in which we meet one of the most memorably mismatched pairs in the annals of literature. the good-looking one is one-hundred-year-old ex-seminarian and "road" scholar Travis O'Hearn. The green one is Catch, a demon with a nasty habit of eating most of the people he meets. Behind the fake Tudor facade of Pine cove, California, Catch sees a four-star buffet. Travis, on the other hand, thinks he sees a way of ridding himself of his toothy traveling companion. The winos, Neo-pagans, and deadbeat Lotharios of Pine Cove, meanwhile, have other ideas. And none of them is quite prepared when all hell breaks loose...