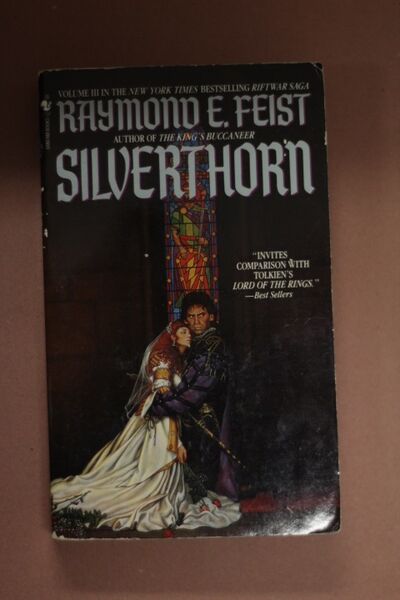 A poisoned bolt has struck down the Princess Anita on the day of her wedding to Prince Arutha of Krondor.

To save his beloved, Arutha sets out in search of the mystic herb called Silverthorn that only grows in the dark and forbidding land of the Spellweavers.

Accompanied by a mercenary, a minstrel, and a clever young thief, he will confront an ancient evil and do battle with the dark powers that threaten the enchanted realm of Midkemia.

To the forest on the shore of the Kingdom of the Isles, the orphan Pug came to study with the master magician Kulgan. His courage won him a place at court and the heart of a lovely Princess, but he was ill at ease with normal wizardry. Yet his strange magic may save two worlds from dark beings who opened spacetime to renew the age-old battle between Order and Chaos.

He held the fate of two worlds in his hands...

Once he was an orphan called Pug, apprenticed to a sorcerer of the enchanted land of Midkemia.. Then he was captured and enslaved by the Tsurani, a strange, warlike race of invaders from another world.

There, in the exotic Empire of Kelewan, he earned a new name--Milamber. He learned to tame the unnimagined powers that lay withing him. And he took his place in an ancient struggle against an evil Enemy older than time itself.

Krondor: The Assassins (The Riftwar Legacy #2)

An evil wind blows through Midkemia. Dark legions have risen up to crush the Kingdom of the Isles and enslave it to dire magics. The final battle between Order and Chaos is abotu to begin in the ruins of the city called Sethanon.

Now Pug, the master magician sometimes known as Milamber, must undertake an awesome and perilous quest to the dawn of time to grapple with an ancient and terrible Enemy for the fate of a thousand worlds.

The terrible Emerald Queen is vanquished…but the war in Midkemia is not yet won, as the remarkable Raymond E. Feist concludes his magnificent Serpentwar Saga with Shards of a Broken Crown—a spellbinding tale of magic, conflict, and treachery that sees the rise of a new threat from the ashes of defeat, an evil poised to strike mercilessly at realm triumphant but weakened by war.