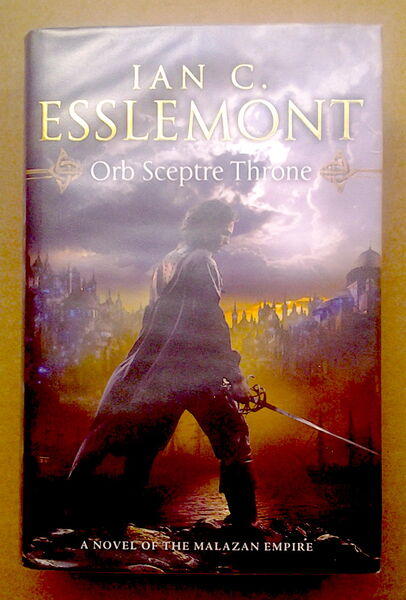 The tumult of great powers colliding has passed and the city of Darujhistan and its citizens can at last get on with what matters: trading, bickering, politicking and enjoying all the good things in life. However, not all are ready to leave the past behind. A treasure hunter, digging amongst the burial grounds that surround the city, is about to uncover a hidden crypt. He will open the last of a series of sealed vaults - the one that no other dared touch - and, in so doing, set free something so terrifying that the knowledge of its internment may have been systematically wiped from all history.

Fortune hunters are also at work far to the south. When a fragment of Moon's Spawn, once the home of Anomander Rake, Son of Darkness, crashed into the Rivan Sea it created a chain of small islands. Legends and rumours already surround them. The most potent of these is that here is hidden the Throne of Night, claimed by some to be the seat of Mother Dark herself. Either way, all who seek this ancient artefact - renegade mages, hardened mercenaries, even a Malazan army deserter - believe it will bestow unlimited power upon the eventual possessor. The stakes are high, greed is rife, betrayal inevitable, and murder and chaos lie in wait...

Epic and exciting, Ian Esslemont's new novel is an enthralling new chapter in the thrillingly imagined world of Malaz.

Reaper's Gale: A tale of the Malazan Book of the Fallen

All is not well in the Letherii Empire. Rhulad Sengar, the Emperor of a Thousand Deaths, spirals into madness, surrounded by sycophants and agents of his Machiavellian chancellor, while the Letherii secret police conduct a campaign of terror against its own people. The Errant, once a farseeing god, is suddenly blind to the future.
Conspiracies seethe throughout the palace, as the empire - driven by the corrupt and self-interested - edges ever-closer to all-out war with the neighbouring kingdoms. And the great Edur fleet - its warriors selected from countless peoples - draws ever closer.
Amongst them are Karsa Orlong and Icarium Lifestealer - each destined to cross blades with the emperor himself. That yet more blood is to be spilled is inevitable... Against this backdrop, a band of fugitives seek a way out of the empire, but one of them, Fear Sengar must find the soul of Scabandari Bloodeye. It is his hope that it might help halt the Tiste Edur, and so save his brother, the emperor.
Yet, travelling with them is Scabandari's most ancient foe: Silchas Ruin, brother of Anomander Rake. And his motives are anything but certain - for the wounds he carries on his back, made by the blades of Scabandari, are still fresh. Fate decrees that there is to be a reckoning, for such bloodshed cannot go unanswered - and it will be a reckoning on an unimaginable scale...
A brutal, harrowing novel of war, intrigue and dark, uncontrollable magic, this is epic fantasy at its most imaginative, storytelling at its most thrilling.