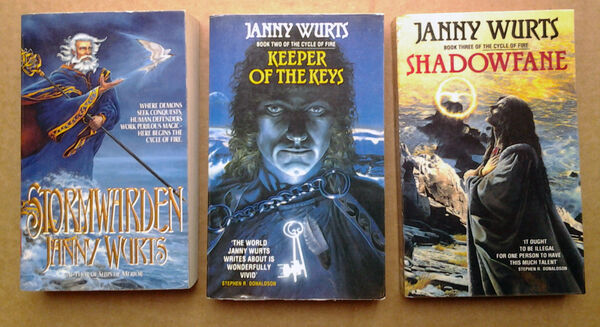 The Cycle of Fire: Stormwarden / Keeper of the Keys / Shadowfane - Janny Wurts

In the land of Vaere, the Stormwarden Anskiere, wizard of wind and water, must draw on the assistance of three young people, all possessing extraordinary talents as well as flaws, in his struggle to defeat the demons that once again threaten total conquest.

The Cycle of Fire: Stormwarden / Keeper of the Keys / Shadowfane - Janny Wurts

The Curse of the Mistwraith - Wars of Light and Shadow, #1 (käytetty pehmeäkantinen, englanti)

The world of Athera lives in eternal fog, its skies obscured by the malevolent Mistwraith. Only the combined powers of two half-brothers can challenge the Mistwraith’s stranglehold: Arithon, Master of Shadow and Lysaer, Lord of Light.

Arithon and Lysaer will find that they are inescapably bound inside a pattern of events dictated by their own deepest convictions. Yet there is more at stake than one battle with the Mistwraith – as the sorcerers of the Fellowship of Seven know well. For between them the half-brothers hold the balance of the world, its harmony and its future, in their hands.

The half-brothers Arithon, Master of Shadow, and Lysaer, Lord of Light, have defeated the Mistwraith and dispersed the fogs that smothered Athera’s skies. But their victory comes at a high price: the Mistwraith has set them at odds under a powerful curse of vengeance. The two princes are locked in deadly enmity, with the fates of nations and the balance of the world’s mystical powers entangled in their feud.

Arithon, forced out of hiding, finds himself hounded by Lysaer and his mighty army. He must take to his natural element – the seas – in order to evade pursuit and steal the initiative. However, his efforts are impeded by outside magical factions, not to mention a drunken prophet sent to safeguard his life, but who seems determined to wreck his cause by misadventure.

Where there is light, there must always be shadow… The fourth volume in Janny Wurts’s spectacular epic fantasy, now re-released with a striking new cover design along with the rest of the series.
The curse that hangs over the Master of Shadow, Arithon, and Lord of Light, Lysaer, is drawing the two half-brothers ever closer towards direct conflict. For the Natural Balance to be maintained, the two must never fight. If they do, one is sure to perish and the Mistwraith will regain its evil power over their world.
Even now, Lysaer – convinced of his own godhead and aided by the treacherous Koriani Sisterhood – is tracking Arithon the Masterbard through the snows and wastes of the winter-locked mountains and the Barrens of Daon Ramon. Arithon is tortured by the knowledge that for the sake of future generations he must not be killed, no matter the cost of others’ lives now. Fighting valiantly to prevent unnecessary suffering, he strikes out on his own; but he is injured and failing fast.
Meanwhile, the ancient Paravians are stirring, summoned by trespassers on their sacred domain; and the Fellowship of Seven are battling on many other fronts, as the Mistwraith’s wards begin to break, and khadrim and free wraiths roam the land…

Where there is light, there must always be shadow... The fifth volume in Janny Wurts's spectacular epic fantasy, now re-released with a striking new cover design along with the rest of the series.The wars began when two half-brothers, gifted of light and shadow, stood shoulder to shoulder to defeat the Mistwraith. Their foe cast a lifelong curse of enmity between them that has so far woven three bitter conflicts and uncounted deadly intrigues.It is a time of political upheavel, fanaticism and rampaging armies. Distrust of sorcery has set off a purge of the talented mageborn - none reviled more than Arithon, Master of Shadow. Through clever manipulation of events at the hands of his half-brother Lysaer, Lord of Light, Arithon's very name has become anathema. Now the volatile hatreds that spearheaded the campaign against Shadow have overtaken all reason.Those that still stand in Arithon's desperate defence are downtrodden, in retreat and close to annihilation. The stage is set for the ultimate betrayal.

A collection of short fantasy stories from the author of the "Cycle of Fire" trilogy and co-author of the best-selling "Empire" series.

Tricked once more by his wily half-brother, Lysaer, Lord of Light, arrives at the tiny harbour town of Merior to find that Arithon’s ship yards have been abandoned and meticulously destroyed, and that the Master of Shadow has disappeared as if into thin air.

Meanwhile Arithon and the Mad Prophet Dakar are travelling on foot through the treacherous Kelhorn Mountains towards the Vastmark clans, there to raise further support for his cause. But raising a warhost is a costly business. Is it mere coincidence that Princess Talith – Lysaer’s beautiful, headstrong wife – is taken captive and held for a vast ransom by a master brigand?

The forces of light and shadow circle and feint, drawing ever closer to a huge conflict. And in the background the Fellowship of Seven Sorcerers and the Koriani Enchantresses watch and plan, and wait…