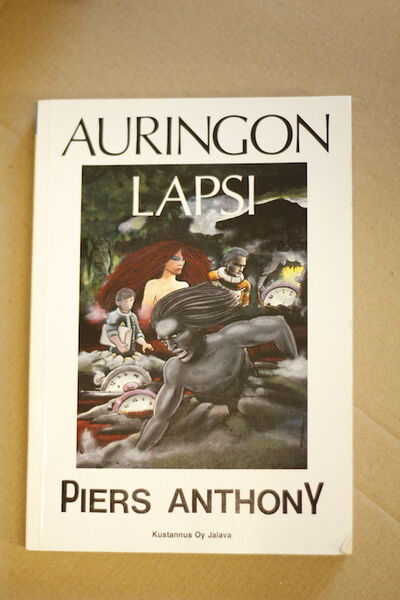 Xanth #1: A Spell for Chameleon

Xanth was the enchanted land where magic ruled--where every citizen had a special spell only he could cast. It was a land of centaurs and dragons and basilisks.

For Bink of North Village, however, Xanth was no fairy tale. He alone had no magic. And unless he got some--and got some fast!--he would be exiled. Forever. But the Good Magician Humfrey was convinced that Bink did indeed have magic. In fact, both Beauregard the genie and the magic wall chart insisted that Bink had magic. Magic as powerful as any possessed by the King or by Good Magician Humfrey--or even by the Evil Magician Trent.

Be that as it may, no one could fathom the nature of Bink's very special magic. Bink was in despair. This was even worse than having no magic at all . . . and he would still be exiled!

Young Esk, the ogre-nymph-human, together with his new-found companions, a beautiful winged centaur and a mole named Volney, search Xanth to gather a company of creatures to defend the Vale of the Vole.

Master magician Humphrey has disappeared, and Xanth's precocious shape-shifter, Prince Dolph, sets out to find him, accompanied by his skeletal sidekick, Marrow. Together, they embark on a series of adventures while searching for the fabled Heaven Cent, the magic coin that holds the secret to Humphrey's disappearance. The fabulous sequel to Vale of the Vole.

Thousands of fans have eagerly awaited the thrilling climax to the newest Xanth trilogy. Ivy, the bored princess of Xanth, uses the Heaven Cent to find a little adventure. What she finds instead is a world similar to her own and a college student who doesn't believe in magic. With Ivy as his teacher, he soon learns of mysteries and wonders not found in any text book. Piers Anthony gets an "A" for adventurous reading and excitement.

As Cluster opens, the alien envoy Pnotl of Sphere Knyfh seeks help from Sphere Sol in a shared galactic-level crisis: Galaxy Andromeda has discovered the secret of energy transfer and intends to use it to steal the basic energy of the Milky Way Galaxy. Knyfh offers the secret of aura transfer on the understanding that Sphere Sol will spread the technology to help create a galactic coalition to find and defeat agents of Andromeda. Sol's highest-Kirlian individual is Flint, a green-skinned native of Outworld, who has a Kirlian aura of two hundred, an eidetic memory (useful for memorizing the complex equations of Kirlian transfer that he will need to communicate to other spheres). He has extraordinary intelligence and is highly adaptable. His mission is complicated, however, by the fact that he is pursued everywhere by a very high Kirlian female Andromedan agent and, somehow, the Andromedans are able to detect and trace Kirlian transfers. Flint embarks upon several missions to bring transfer technology to neighboring spheres, inhabiting various alien forms. His efforts are successful despite attacks and sabotage by the Andromedan agent. Through the conflict, however, the mutual attraction of their two vastly superior auras begins to undermine their individual loyalty to their own Spheres. Flint and a group of other entities recover the information that will allow them to detect and trace transfers, and a member of the group is revealed as the Andromedan agent. One result is the catastrophic destruction of the local habitat. Flint and his nemesis are transferred into alien Mintakan bodies to survive. Choosing to leave things with parity between their two galaxies, Flint and the Andromedan mate and remain together until their auras fade (which happens rapidly, since their physical bodies have been destroyed).

The Prophecy: A Roundear there Shall Surely be; Born to be Strong, Raised to be Free; Fighting Dragons in his Youth; Leading Armies, Nothing Loth; Ridding his Country of a Sore; Joining Two, then uniting Four; Until from Seven there be One; Only then will his Task be Done. When Kelvin was a child, his mother read to him from the Book of Prophecy and he asked what the poem meant. Now he was about to learn. The Kingdom of Rud languishes under the heel of a usurper; an evil sorcerer has taken the throne in the name of his wicked daughter. Even deep in the forest, away from all power, the people tremble and await the day of prophecy's fulfillment. It cannot come too soon: Charlain and her children are soon to lose their home to the tax collector. But Kelvin and Jon have other plans. they have found a dragon's territory, where scales of purest gold, shed by the dragon, lie free on the ground for anyone with courage, or innocence, to take. And the words of Mouvar the prophet echo across Rud.

The Prophecy of Mouvar is at work in the Seven Kingdoms, and in the Worlds of the many Frames.

In the kingdom of Rud, Charles, Merlain, and their brother, Dragon Horace, are in the center of a plot against Kelvin as they seek to steal the treasure of the Orc Kingdom.

The mysterious prophecy that has shaped the life of Kelvin Knight Hackleberry and his family seems nearly to have run its course. The Two Kingdoms that were joined by Kelvin to form Kelvinia have now been united with three others, to make a great confederation under the rule of the young twin kings, Kildom and Kildee. Kelvin has earned some time to rest with his family. Charles and Merlain are now twenty years old, and so is Dragon Horace, their brother who is the Great King of all the land.

But the clouds of the last battle are gathering. The evil Professor DeVale and his witch servant Zady had been foiled in their attempt to destroy Kelvin by using his children--their evil plot has led to a stronger, more peaceful land under its rightful rulers. Now they will try one last time to pervert all that is good in the universe of the frames--and although the Prophecy of Mouvar has been accurate up to now, still there is a chance that evil will prevail.

In Isle of Woman and Shame of Man, the firs two volumes of the monumental Geodyssey saga, bestselling author Piers Anthony chronicles the triumphs and tragedies of two remarkable families reborn again and again in some of the most turbulent eras of human history.

Now, with Hope of Earth, Anthony brings us a stirring epic that ranges from our ancient beginnings in Africa's Great Rift Valley to the windswept Andes a century from now, and includes some of history's most fascinating figures--the mysterious "Ice Man" of the Swiss Alps, the decadent King Herod, the British Warrior Queen Boudica, the Mongol Chieftan Tamurlane, and King Louis XIV of France.

Exciting, imaginative, and inspiring, Hope of Earth is the story of a group of heroic men and women, bound by ties of passion, honor, and blood, who struggle to transcend our violent past and forge and new and shinning future.

Of Man and Manta - a trilogy by Piers Anthony

Omnibus edition comprising the entire trilogy of Omnivore, Orn, and Ox. Across time and space roamed the Three - the cripple, the woman, the man of brawn. Trying to unravel the mysteries of fantasy worlds, and accompanied always by the strange and weirdly beautiful Mantas.