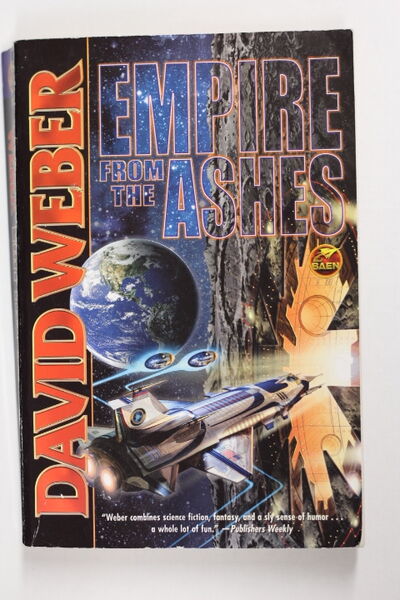 Empire From the Ashes (käytetty)

Originally published as three separate novels, Mutineer's Moon, The Armageddon Inheritance and Heirs of Empire, this volume recounts the adventures for Duhak, an AI-controlled Imperial starship, when it encounter's Colin Macintyre's routine flight over the moon.

For Lt. Commander Colin Maclntyre, it began as a routine training flight over the Moon. For Dahak, a self-aware Imperial battleship, it began millennia ago when that powerful artificial intelligence underwent a mutiny in the face of the enemy. The mutiny was never resolved--Dahak was forced to maroon not just the mutineers but the entire crew on prehistoric Earth. Dahak has been helplessly waiting as the descendants of the loyal crew regressed while the mutineers maintained control of technology that kept them alive as the millennia passed.

But now Dahak's sensors indicate that the enemy that devastated the Imperium so long ago has returned--and Earth is in their path. For the sake of the planet, Dahak must mobilize its defenses. And that it cannot do until the mutineers are put down. So Dahak has picked Colin Maclntyre to be its new captain.

Now Maclntyre must mobilize humanity to destroy the mutineers once and for all--or Earth will become a cinder in the path of galactic conquest.

Colin MacIntyre, a NASA astronaut kidnapped by a starship impersonating Earth's moon, has just suppressed a five-thousand-year-old mutiny, but now he faces an even bigger challenge.

For really tough jobs, Emperor Colin, the first of that name, is your man. The only person in the galaxy ever to stop the genocidal Achuutani, he went on from there to resurrect an empire that died fourty-five thousand years ago. He's still got a few problems - like a traitor out to murder him and three-quarters of a billion of his subjects - but if anyone can handle the job, it's Colin. But the rest of the galaxy better brace itself, because his progeny are on the way. Not that Sean and Harriet aren't nice kids; it's just that they've had a bad day.They're a long way from home, marooned with a blown up starship that's left them stranded on a theocratic world of gun powder and pikes, and Mother Church of that world doesn't like them very much. In fact, she's declared them demons, proclaimed Holy War, marshalled the Holy Host, and ordered them exterminated. You might think that things look pretty bleak for the kids, but in reality it's Mother Church that's in trouble - because Sean and Harry are chips off the old block - and they're about to get angry...

A space adventure with a strong female character in the tradition of Sassinak and Generation Warriors--by the bestselling author of Mutineers' Moon. The "invincible", planet-wrecking pirates made a big mistake when they raided ex-commando leader Alicia DeVries' quiet home world and murdered her family. The Imperial forces seem helpless against the marauders so Alicia decides to turn pirate herself--by stealing an Imperial ship to carry out her vendetta.

Imperial Intelligence couldn’t find them, the Imperial Fleet couldn’t catch them, and local defenses couldn’t stop them. It seemed the planet-wrecking pirates were invincible. But they made a big mistake when they raided ex-commando leader Alicia DeVries’ quiet home work, tortured and murdered her family, and then left her for dead. Alicia decided to turn “pirate” herself, and stole a cutting-edge AI ship from the Empire to start her vendetta. Her fellow veterans think she’s gone crazy, the Imperial Fleet has shoot-on-sight orders. And of course the pirates want her dead, too. But Alicia DeVries has two allies nobody knows about, allies as implacable as she is: a self-aware computer, and a creature from the mists of Old Earth’s most ancient legends. And this trio of furies won’t rest until vengeance is served.

Hurtled back in time into the Thirty Years War by an unknown force, Mike Stearns and his fellow West Virginia coal miners join forces with the king of Sweden to form the Confederated Principalities of Europe and take on the scheming Cardinal Richelieu as they struggle to rescue Mike's wife from war-torn Amsterdam and his sister from the Tower of London.

The Star Kingdom of Manticore and the Republic of Haven have been enemies for Honor Harrington's entire life, and she has paid a price for the victories she's achieved in that conflict. And now the unstoppable juggernaut of the mighty Solarian League is on a collision course with Manticore. The millions who have already died may have been only a foretaste of the billions of casualties just over the horizon, and Honor sees it coming.

She's prepared to do anything, risk anything, to stop it, and she has a plan that may finally bring an end to the Havenite Wars and give even the Solarian League pause. But there are things not even Honor knows about. There are forces in play, hidden enemies in motion, all converging on the Star Kingdom of Manticore to crush the very life out of it, and Honor's worst nightmares fall short of the oncoming reality.

But Manticore's enemies may not have thought of everything after all. Because if everything Honor Harrington loves is going down to destruction, it won't be going alone.

Bahzell of the Hradani is back! Exciting fantasy adventure by the New York Times and USA TODAY bestselling author of the Honor Harrington series.

In Wind Rider’s Oath, Bahzell became a wind rider—the first hradani wind rider in history. And, even if Bahzell is the War God’s champion, because the wind riders are the elite of the elite among the Sothoii, Bahzell’s ascension is as likely to stir resentment as respect. What’s more, Baron Tellian’s daughter, the heir to the realm, seems to be thinking that he is the only man—or hradani—for her. Now, War Maid’s Choice continues the story—and things really get complicated.

The series is mostly set around the 31st century, on a distant world dubbed "Safehold" where a group of humans has hidden themselves from an alien race known as the Gbaba. When first contact was made between the humans and the Gbaba, the Gbaba began an extermination campaign which nearly succeeded in destroying all known humans in the galaxy, including the entire population of Earth. The humans on Safehold managed to avoid detection by reverting to a pre-electrical and pre-electronics technology base and incorporating that into a religious belief system which forbade any higher technology on penalty of death.

Prince Roger MacClintock was an heir to the galaxy's Throne of Man-and a self-obsessed spoiled young brat . . . until he and the Royal Marines sent to protect him were stranded on Marduk with only their feet to get them half way around the entire planet. So far, they've traversed a continent, crossed a sea full of ship-eating monsters, taken over an enemy spaceport, and hijacked a starship. But they're not home-free yet, because home is no longer free. In Roger's absence, a palace coup by enemies of the MacClintock family has seized control of the Empire. His mother the Empress is a captive in the palace and even in her own body, drugged so that her will is not her own. Roger's bother, the heir to the throne, is dead. And Roger himself has been branded an outlaw and traitor. Roger and his faithful band of human marines and native alien warriors have beaten the barbarian planet Marduk. Now they must re-conquer an interstellar empire. But they aren't about to give up, and with the help of those on the throne planet who are still loyal to the Empress they will infiltrate (under cover of a restaurant specializing in exotic Mardukan dishes, no less), they will make anyone who gets in their way (such as local mobsters who make the mistake of kidnapping Roger's fiancé) very sorry that they did, and they will not rest until the rightful ruler has been restored. Once again, a lot of power-hungry people are going to learn a hard lesson: You do not, ever, mess with a MacClintock!

Captain Maneka Trevor was the sole human survivor of the Dinochrome Brigade's 39th Battalion . . . but she hadn't wanted to be one.

The doctors and the Bolo techs have put them both back together again, yet there are wounds no doctor or technician can heal. And now Maneka and Lazarus must serve together once again, in a war whose stakes are literally the survival or extermination of the human race. They are all that stand between a desperate, secret colony of humanity and destruction: a Bolo commander torn by survivor's guilt and a Bolo whose very existence reminds her of all she has lost.

The odds against them are heavy, the stakes are huge, and surrender is not an option. The Dinochrome Brigade is used to that, but can Maneka and Lazarus survive their own shared past to defend the present?

Off Armageddon Reef
Book 1 of 10: The Safehold series

Humanity pushed its way to the stars - and encountered the Gbaba, a ruthless alien race that nearly wiped us out.

Earth and her colonies are now smoldering ruins, and the few survivors have fled to distant, Earth-like Safehold, to try to rebuild. But the Gbaba can detect the emissions of an industrial civilization, so the human rulers of Safehold have taken extraordinary measures: with mind control and hidden high technology, they've built a religion in which every Safeholdian believes, a religion designed to keep Safehold society medieval forever.

800 years pass. In a hidden chamber on Safehold, an android from the far human past awakens. This "rebirth" was set in motion centuries before, by a faction that opposed shackling humanity with a concocted religion. Via automated recordings, "Nimue" - or, rather, the android with the memories of Lieutenant Commander Nimue Alban - is told her fate: she will emerge into Safeholdian society, suitably disguised, and begin the process of provoking the technological progress which the Church of God Awaiting has worked for centuries to prevent.

Nothing about this will be easy. To better deal with a medieval society, "Nimue" takes a new gender and a new name, "Merlin." His formidable powers and access to caches of hidden high technology will need to be carefully concealed. And he'll need to find a base of operations, a Safeholdian country that's just a little more freewheeling, a little less orthodox, a little more open to the new.

And thus Merlin comes to Charis, a mid-sized kingdom with a talent for naval warfare. He plans to make the acquaintance of King Haarahld and Crown Prince Cayleb, and maybe, just maybe, kick off a new era of invention. Which is bound to draw the attention of the Church...and, inevitably, lead to war.

It's going to be a long, long process. And David Weber's epic Off Armageddon Reef is can't-miss sci-fi.

In the nine centuries since the creation of the world, the Church of God Awaiting has grown all-powerful as the keeper of men's souls. It rules the planet of Safehold with the imprimatur of God Himself ...and with an iron fist.

Lately, the island kingdom of Charis has rejected the Church's authority. Charis has repelled the Church's first attack and is preparing to strike back. Yet not all those who support the Church are corrupt, and the Church stands ready to use the faith and belief of those blameless souls for its own cynical ends. The gauntlet has been cast down, and full-scale religious war the ugliest war of all looms over Safehold.

To prevail, King Cayleb of Charis has one ally with resources not even he can imagine: the mysterious warrior monk called Merlin, who holds the secret knowledge Charis may need to survive. Merlin is Cayleb's adviser, protector, and friend ...and, secretly, also the cybernetic avatar of a young woman named Nimue Alban, who died before the day of creation itself. Who was born on a murdered world called 'Earth'.