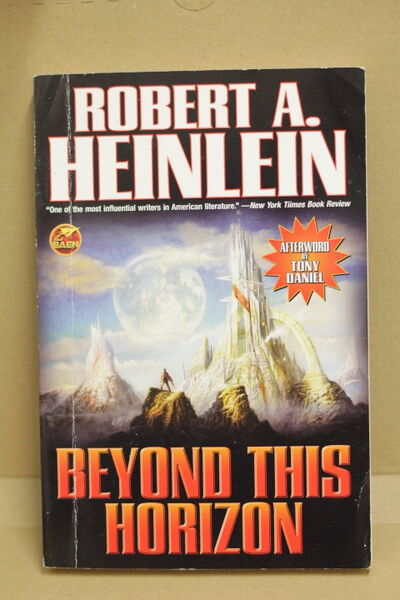 about the author:
Robert A. Heinlein (1907-1988), often called the Science Fiction Grand Master, was the author of such ground-breaking novels as STARSHIP TROOPERS, RED PLANET, STRANGER IN A STRANGE LAND and THE MOON IS A HARSH MISTRESS. He is generally considered the greatest and most influential science fiction writer of the twentieth century. In addition to being a bestselling author, Heinlein's novels won 4 Hugo awards, 3 "retro Hugo" awards, and the first "Grand Master Award" from the Science Fiction Writers of America.

Utopia has been achieved. For centuries, disease, hunger, poverty and war have been things found only in the histories. And applied genetics has given men and women the bodies of athletes and a lifespan of over a century.

They should all have been very happy....

But Hamilton Felix is bored. And he is the culmination of a star line; each of his last thirty ancestors chosen for superior genes. Hamilton is, as far as genetics can produce one, the ultimate man. And this ultimate man can see no reason why the human race should survive, and has no intention of continuing the pointless comedy.

However, Hamilton's life is about to become less boring. A secret cabal of revolutionaries who find utopia not just boring, but desperately in need of leaders who know just What Needs to be Done, are planning to revolt and put themselves in charge. Knowing of Hamilton's disenchantment with the modern world, they have recruited him to join their Glorious Revolution. Big mistake! The revolutionaries are about to find out that recruiting a superman is definitely not a good idea

Job: A Comedy of Justice

Something was truly out to get him: GOD? SATAN? LOKI?

Whoever - or whatever - obviously never intended to let Alex get back home to Kansas.

It all began with that firewalking gig in Polynesia. After negotiating the bed of hot coals with only a small blister, he suddenly found the world changed around him. Instead of being Alexander Hergensheimer, minister of a fundamentalist church, he was now suppose to be Alec Graham, carryingunderworld money and in the middle of an affair with the charming stewardess, Margrethe - the only good thing about the whole business.

Then there was the impossible iceberg that stgruck the ship and dumped Alex and Margrethe naked into the sea, to be recued by a Royal Mexican Coast Guard Plane. The next change took a double earthquake. And after that as change followed impossible change, things went from bad to worse. Alex found it impossible even to buy Margrethe the hot fudge sundae that he promised her.

Whatever the change, however, Alex found one constant - all the signs pointed to Armageddon and the Day of Judgement. And Margrethe wasn't even a Christian - perversely, ahe believed in Odin and Ragnarok. Somehow, he had to bring her into a state of grace. Without her, Heaven would be no paradise to him.

Somewhere he felt, there had to be an answer to his question and to the questoin of why he was being persecuted. And, of course, there was.

But it was truly a Hell of an answer.

Matt Dodson reports to the Colorado base of the Interplanetary Patrol, a new cadet with a fierce desire to become a member of the Patrol, which for over a century has kept the peace throughout the Solar System. Matt and fellow cadets soon leave the Earth base for training on Terra Station, where they learn, among other things, astrogation, survival skills, alien languages and how to maneuver in outer space. Matt loves the Patrol and finds, upon returning for a visit to his family in Iowa, that his real "home" is no longer on Earth.

When a call for help comes from a ship stranded on Venus, Matt is among the cadets chosen to accompany the Patrol Captain on this rescue mission. What they discover after they land on Venus is not what they expected… The cadets and their captain are taken prisoner, and the "rescue" signal came from Matt's old nemesis. Matt and his fellow cadets must learn to negotiate with the Venusians after their Captain is seriously injured. What seemed like a short and exciting adventure to another planet becomes a grueling experience, and the cadets' diplomatic as well as engineering skills and ingenuity are sorely tested.

Robert A. Heinlein's wit and exuberance are on full display here. Published in 1948, long before other writers even imagined cellphones or hydraulic mattresses (waterbeds), readers can enjoy the lively dialog and inventiveness that are hallmarks of Heinlein's work.

It doesn’t seem likely for twins to have the same middle name. Even so, it’s clear that Castor and Pollux Stone both have "Trouble" written in that spot on their birth certificates. Of course, anyone who’s met their grandmother Hazel would know that they came by it honestly…

Join the Stone twins as they connive, cajole, and bamboozle their way across the Solar System in the company of the most high-spirited and hilarious family in all of science fiction. This light-hearted tale has some of Heinlein’s sassiest dialogue (not to mention the famous Flat Cats incident!). Oddly enough, it’s also a true example of real family values–for when you’re a Stone, your family is your highest priority.