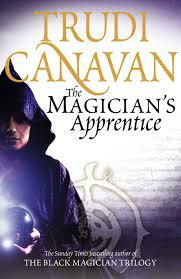 Set hundreds of years before the events of The Magicians' Guild, The Magician’s Apprentice is the new novel set in the world of Trudi Canavan’s Black Magician Trilogy.

In the remote village of Mandryn, Tessia serves as assistant to her father, the village Healer. Her mother would rather she found a husband. But her life is about to take a very unexpected turn.

When the advances of a visiting Sachakan mage get violent, Tessia unconsciously taps unknown reserves of magic to defend herself. Lord Dakon, the local magician, takes Tessia under his wing as an apprentice.

The long hours of study and self-discipline also offer more opportunities than she had ever hoped for, and an exciting new world opens up to her. There are fine clothes and servants – and, to Tessia’s delight – regular trips to the great city of Imardin.

But along with the excitement and privilege, Tessia is about to discover that her magical gifts bring with them a great deal of responsibility. For great danger looms on the horizon for Tessia and her world.

The Magicians' Guild
The Black Magician Trilogy: Book One

This year, like every other, the magicians of Imardin gather to purge the city of undesirables. Cloaked in the protection of their sorcery, they move with no fear of the vagrants and miscreants who despise them and their work-—until one enraged girl, barely more than a child, hurls a stone at the hated invaders...and effortlessly penetrates their magical shield.

What the Magicians' Guild has long dreaded has finally come to pass. There is someone outside their ranks who possesses a raw power beyond imagining, an untrained mage who must be found and schooled before she destroys herself and her city with a force she cannot yet control.

"Even if a magician's powers surface of their own accord, he will soon be dead if he does not gain the knowledge of how to control them." Alone among all the novices in the Magicians' Guild, only Sonea comes from lowly beginnings. Yet she has won powerful allies—including Lord Dannyl, newly promoted to Guild Ambassador. But Dannyl must now depart for the Elyne court, leaving Sonea at the mercy of the lies and malicious rumors her enemies are busy spreading ... until the High Lord Akkarin steps in. The price of Akkarin's support is dear, however, because Sonea, in turn, must protect his mysteries and a secret that could lead a young novice mage deep into the darkness. Meanwhile, Dannyl's first order to resume High Lord Akkarin's long abandoned research into ancient magical knowledge is setting him on an extraordinary journey fraught with unanticipated peril as he moves ever-closer to a future both wondrous ... and terrible.

Age of the Five, Book One: Priestess of the White

When Auraya was chosen to become a priestess, she could never have believed that a mere ten years later she would be one of the White, the gods’ most powerful servants.

Sadly, Auraya has little time to adapt to the exceptional powers gifted her by the gods. Mysterious black-clad sorcerers from the south plague the land, and rumours reach the White of an army being raised. Auraya and her new colleagues work tirelessly to seal alliances and unite the northern continent under their banner, but time is running out.

War is coming to the lands of the White, and unless Auraya can master her new abilities, even the favour of the gods may not be enough to save them

Age of the Five, Book Two: Last of the Wilds

Although the architect of the White’s victory, Auraya feels no joy. Her days are spent trying to reconcile the Dreamweavers and the priesthood, while her sleep is filled with nightmares. The dead haunt her and the only one she trusts to help has vanished.

Still struggling to come to terms with the increasingly powerful memories of the long-dead Mirar, the Dreamweaver, Leiard, flees into the mountains with Emerahl, perhaps the last of the Wilds. Emerahl is powerfully gifted, and helps Leiard to make sense of his strange jumble of memories. What they discover will change his life, and the world, forever . . .

Voice of the Gods
Age of the Five: Book Three

Unable to avoid being drawn into the terrible conflict, Auraya, now protector of the Siyee, fears she will be unable to meet the conditions of the all-powerful gods she once served. And an offer from a mysterious woman may be impossible for Auraya to refuse, but, if revealed, would brand her an enemy of the gods. Now, the immortal Wilds will not be deterred in their quest for powerful, long-buried secrets. But they have deadly adversaries who also seek the world-shattering truth . . . and it may appear in a form that no one anticipates.