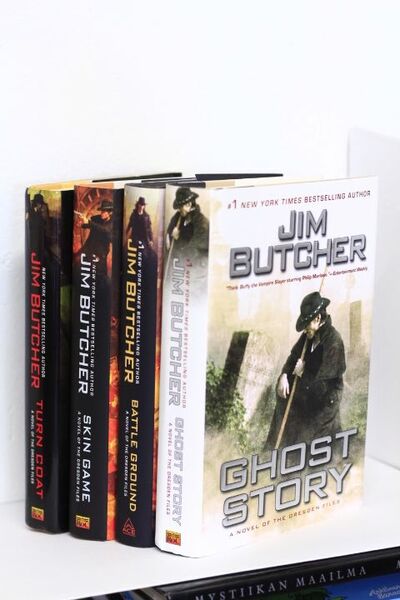 Meet Harry Dresden, Chicago’s first (and only) Wizard P.I. Turns out the “everyday” world is full of strange and magical things – and most of them don’t play well with humans. That’s where Harry comes in.

Harry is the best at what he does – and not just because he’s the only one who does it. So whenever the Chicago P.D. has a case that transcends mortal capabilities, they look to him for answers. But business isn’t just slow, it stinks.

So when the police bring him in to consult on a grisly double murder committed with black magic, Harry’s seeing dollar signs. But where there’s black magic, there’s a black mage behind it. And now that mage knows Harry’s name. And that’s when thing start to get…interesting.

Harry Dresden is no longer Chicago's only professional wizard. Now, he's Winter Knight to Mab, the Queen of Air and Darkness. Her word is his command. And her first command is the seemingly impossible: kill an immortal. Worse still, there is a growing threat to an unfathomable source of magic that could mean the deaths of millions.

Beset by enemies new and old, Harry must gather his friends and allies, prevent an apocalypse, and find a way out of his eternal subservience before his newfound infinite powers claim the only thing he has left to call his own...

Since time immemorial, the Spires have sheltered humanity. Within their halls, the ruling aristocratic houses develop scientific marvels, foster trade alliances, and maintain fleets of airships to keep the peace.
Captain Grimm commands the merchant ship Predator. Loyal to Spire Albion, he has taken their side in the cold war with Spire Aurora, disrupting the enemy's shipping lines by attacking their cargo vessels. But when the Predator is damaged in combat, Grimm joins a team of Albion agents on a vital mission in exchange for fully restoring his ship.

And as Grimm undertakes this task, he learns that the conflict between the Spires is merely a premonition of things to come. Humanity's ancient enemy, silent for more than ten thousand years, has begun to stir once more. And death will follow in its wake...

Tavi has escaped the Calderon Valley and the mysterious attack of the Marat on his homeland. But he is far from safe, as trying to keep up the illusion of being a student while secretly training as one of the First Lord's spies is a dangerous game. And he has not yet learned to use the furies, making him especially vulnerable.

When the attack comes it's on two fronts. A sudden strike threatens the First Lord's life and threatens to plunge the land into civil war. While in the Calderon Valley, the threat faced from the Marat is dwarfed by an ancient menace. And Tavi must learn to harness the furies if he has any chance of fighting the greatest threat Alera has ever known . . .