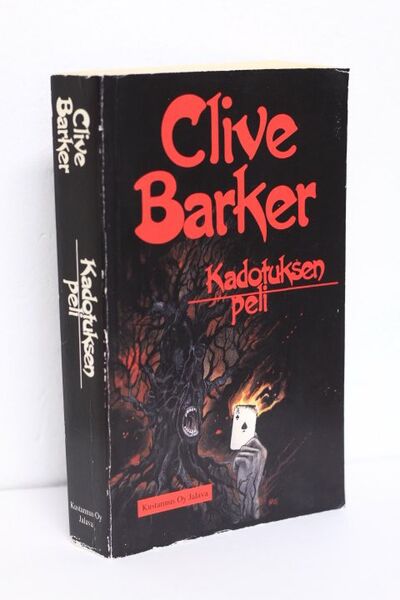 Here is storytelling on a grand scale — the stuff of which a classic is made. Weaveworld begins with a rug — a wondrous, magnificent rug — into which a world has been woven. It is the world of the Seerkind, a people more ancient than man, who possesses raptures — the power to make magic. In the last century they were hunted down by an unspeakable horror known as the Scourge, and, threatened with annihilation, they worked their strongest raptures to weave themselves and their culture into a rug for safekeeping. Since then, the rug has been guarded by human caretakers.

The last of the caretakers has just died.

Vying for possession of the rug is a spectrum of unforgettable characters: Suzanna, granddaughter of the last caretaker, who feels the pull of the Weaveworld long before she knows the extent of her own powers; Calhoun Mooney, a pigeon-raising clerk who finds the world he's always dreamed of in a fleeting glimpse of the rug; Immacolata, an exiled Seerkind witch intent on destroying her race even if it means calling back the Scourge; and her sidekick, Shadwell, the Salesman, who will sell the Weaveworld to the highest bidder.

In the course of the novel the rug is unwoven, and we travel deep into the glorious raptures of the Weaveworld before we witness the final, cataclysmic struggle for its possession.

Barker takes us to places where we have seldom been in fiction--places terrifying and miraculous, humorous, and profound. With keen psychological insight and prodigious invention, his trademark graphic vision balanced by a spirit of transcendent promise, Barker explores the darkness and the light, the magical and the monstrous, and celebrates the triumph of the imagination.

Clive Barker is widely acknowledged as the master of nerve-shattering horror. The Hellbound Heart is one of his best, one of the most dead-frightening stories you are likely to ever read, a story of the human heart and all the great terrors and ecstasies within. It was also the book behind the cult horror film, Hellraiser.

In a quiet house on a quiet street Frank and Julia are having an affair. Not your ordinary affair. For Frank it began with his own insatiable sexual appetite, a mysterious lacquered box- and then an unhinged voyage through a netherworld of imaginable pleasures and unimaginable horror… Now Frank- or what is left of Frank -waits in an empty room. All he wants is to live as he was before. All Julia can do is bring him her unfulfilled passions…and a little flesh and blood…

In a nightworld where decomposing corpse-assassins stalk their prey, Marty Strauss, the bodyguard to a famous industrialist, discovers that someone is coming to collect the soul of his employer as payment for an ancient debt

A famous photographer lying in a coma holds the key to the salvation of the world. But first he must travel back into the traumatic events of his childhood. Will Rabjohns has everything. He's handsome, he's rich, and he's revered as the world's greatest wildlife photographer. He's also a haunted man, driven to risk his life for his art -- to capture the raw tragedy of the wild, the beauty of nature's violence. After a near fatal encounter with a polar bear, he lies in a coma. There he must relive a central childhood memory: a meeting with ancient and terrible forces which revealed to him the mystery at the heart of nature. And he realizes that if he awakes, he must confront the darkness of his past and wage a war, not only for his own soul, but for the soul of the planet and every animal that breathes upon it.

A massive tale of secrets, corruption and magic between two feuding families the powerful Gearys and the shadowy Barbarossas.

EVERY FAMILY HAS A SECRET

As rich as the Rockefellers, as glamorous as the Kennedys, the Geary dynasty has held subtle sway over American life since the Civil War, brilliantly concealing the depths of its corruption. All that is about to change. For the Gearys are at war. Their enemies are another dynasty the Barbarossas whose origins lie not in history but in myth.

When the prodigal prince of the Barbarossa clan, Galilee, falls in love with Rachel Geary, the pent-up loathing between the families erupts in a mutually destructive frenzy. Adulteries are laid bare. Secrets creep out. And insanity reigns.Galilee is a massive tale, mingling the sharp realism of Barkers bestseller Sacrament with the dark invention for which hes known worldwide, and surpassing both with an epic tale which will surely rank as the crowning achievement of his career.

Mister B. Gone marks the long-awaited return of Clive Barker, the great master of the macabre, to the classic horror story. This bone-chilling novel, in which a medieval devil speaks directly to his reader—his tone murderous one moment, seductive the next—is a never-before-published memoir allegedly penned in the year 1438. The demon has embedded himself in the very words of this tale of terror, turning the book itself into a dangerous object, laced with menace only too ready to break free and exert its power.

A brilliant and truly unsettling tour de force of the supernatural, Mister B. Gone escorts the reader on an intimate and revelatory journey to uncover the shocking truth of the battle between Good and Evil.